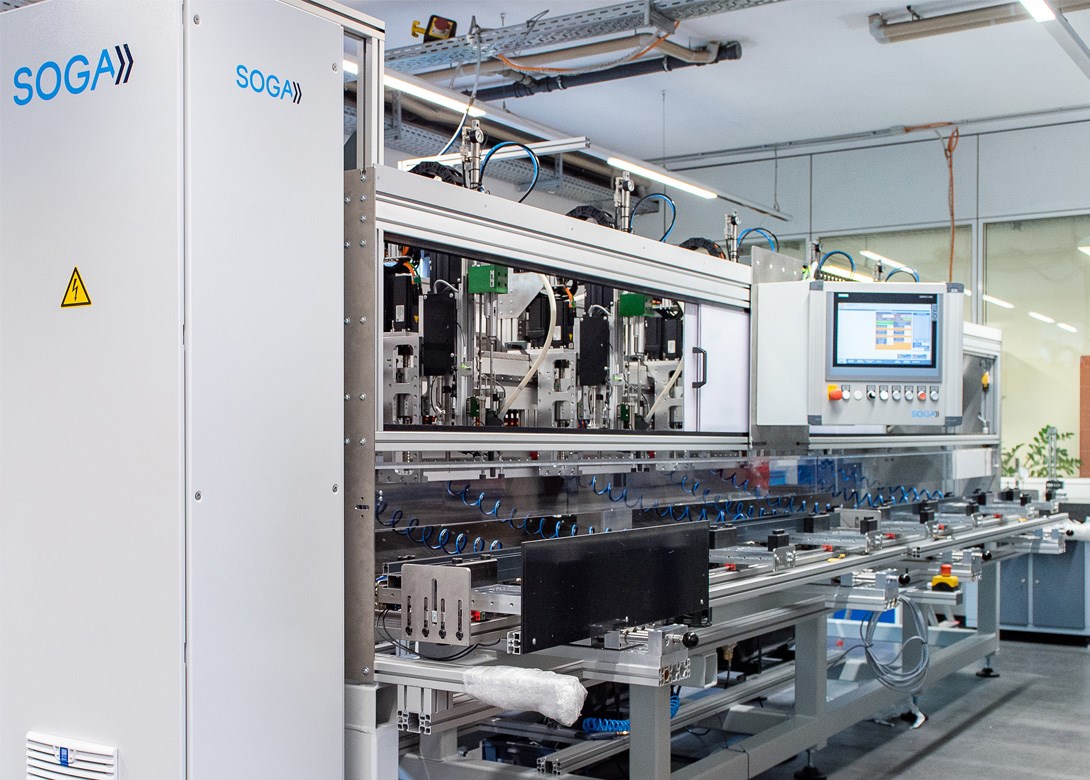 The drive technology required for the head axes, such as servo-synchronous motors, planetary and rack and pinion drives, as well as drive regulator are provided by STÖBER. The extremely compact and dynamic LeanMotor is also used. The new encoderless motor class by STÖBER is a cost-effective and robust alternative to the servo motor. In addition, STÖBER took care of the mechanical design and dimensioning. DEPRAG, the screwdriving specialists, complemented this partnership and supplied the necessary screwdriver function modules.

“We provide our customers with special solutions which can be used in production immediately after delivery,” explains Fabian Gallenbach. Alongside his ten employees, the managing director of SOGA Gallenbach GmbH in Pforzheim designs and develops special machines, solutions for fixture construction, as well as 3D printing and the sale of pneumatic components. Its customers come from the medical and aerospace industries, amongst others – “These are the sectors which have particularly stringent requirements when it comes to precision,” says Gallenbach. And he knows all about this, as he completed his training with a Swiss watch manufacturer where he learnt to half a micron. When the company was founded, his aim was to apply these skills within mechanical engineering. In this way, the company would be able to meet the ever increasing demands of customers. “We hardly ever get simple enquires any more,” notes Gallenbach.

When implementing sophisticated solutions, SOGA Gallenbach relies on the support of specially selected suppliers or rather, partners. These long-term partners include STÖBER Antriebstechnik GmbH + Co KG, also based in Pforzheim, and DEPRAG SCHULZ GMBH u CO based in Amberg.

SOGA Gallenbach is in regular contact with STÖBER. This makes it easier to get straight down to the detail of new projects. Whenever suitable motor-gear combinations are sought, the drive specialists have frequently supported the machine builders – for example in the development of a multi-screwdriving unit. The customer in this case: ROMA – a manufacturer of sun screening systems such as roller shutters, external venetian blinds and textile screens.

Up to now, this medium-sized manufacturer has used an automatic movable screwdriving unit with screw feeding but without monitoring features, for drilling and assembling up to three profile rails made from aluminium or plastic. “Shavings are often created between the screw head and profile rails, particularly when drilling in wrought aluminium alloys,” explains Gallenbach. An end cap is attached to the screw as a visible part; however, shavings can prevent the cap from attaching properly. Production employees had to manual rework the position time and again and ROMA wanted to avoid this in future.

“We have developed more than 50 screwdriving stations with torques from 0.4Nm to 200Nm over the past 15 years,” reports Gallenbach. “We have enabled our customers to assemble screws without manual retightening or reworking by the operator.”

ROMA wanted a solution that would also pre-drill the 710mm to 5,710mm profile rails. SOGA therefore developed a screwdriving station which can monitor screw depths and tightening torques for dependable processing. “We have developed a strategy particularly for plastic screw assembly where our pneumatic screwdriver works with pressure pulses,” explains Gallenbach.

Plastic does not require a higher final torque for tightening than for the whole screwdriving process. Therefore, the machine needs to be sensitive. The engineers have also equipped the system with two drawers for inserting the profile rails. The machine feeds the profiles for processing either separately or synchronously. The components are inserted and clamped manually.

The most suitable motor-gear combination

For SOGA Gallenbach, it was important to have STÖBER at its side for this development project as it had experience of the company as a proficient partner with a comprehensive product portfolio. “The drawers move over two Y axes in automatic mode,” describes Guido Wittenauer, STÖBER sales representative, who looks after SOGA. The drive specialists supplied a planetary gear from the PE series with belt and spindle drive combined with an EZ synchronous servo motor for each drawer.

The system automatically feeds the screws and assembles them pneumatically. The station is equipped with five assembly heads that move independently from one another in X direction on a rack. “Each head is equipped with a Z and a drilling axis,” says Wittenauer. For the X axis, STÖBER supplied ZVPE series rack and pinion drives, as well as EZ synchronous servo motors. For the Z axis, EZ motors with spindle drives were also used. In order to prevent the five heads from colliding with one another on the rack, the STÖBER engineers have implemented a three-fold collision prevention concept – the controller monitors the positions in relation to one another, the software limit switch has been set with the permissible traversing range for each X axis, and in addition, there is a mechanical safety switch on each head.

The assembly heads, so-called screwdriver function modules (SFM) are supplied by DEPRAG. The screwdriving unit reliably processes screw after screw. A robust multi-spindle design is used to achieve the required cycle time. The torque range for this module can be individually adjusted to specific screwdriving tasks. The DEPRAG screwdriving module is comprehensive and customised with original components for specialised production tasks. It is tried and tested and integrated into the complete machine as a fully functional module. Any expenses for specific engineering requirements are therefore kept to a minimum.

“The wide spectrum of our standard modules provides an efficient solution for every screwdriving task. And even specialised applications can be realised individually and at low cost based on our broad range of standard programmes,” Daniel Guttenberger, product manager for DEPRAG Screwdriving Technology explains the benefits of the screwdriver function module. The screws needed are fed using the vibratory bowl feeder ‘eacy feed’. This means that all five screwdriver function modules can be supplied by only one feeding device. This is made possible by the use of a vibratory bowl feeder with double spiral, also known as a twin device, in combination with a threefold separator.

A motor which was as compact and lightweight as possible was needed for integration into the drill spindle. “This enables us to keep the moveable mass of the five axes as low as possible, thus achieving fast positioning,” describes Wittenauer. In addition to drilling, countersinking was also required as an option, necessitating highly dynamic motor regulators. With this is mind, STÖBER supplied the LeanMotor (LM). This new development enabled speed and torque to be smoothly regulated from standstill up to maximum speed with full torque control – the LM works completely encoderlessly.

This solution is significantly more compact and lightweight than an asynchronous drive, and more robust and cost effective than a servo drive, whilst providing the same performance. Working at up to 96% efficiency, the motors attain the efficiency class IE5. ROMA therefore benefits from the lower energy requirements and the longer lifespan. Each head has three motors which can be located very closely together. “As our LeanMotor works without an encoder, it also only needs a standard power cable without additional wires or shielding,” explains Wittenauer.

Reliability in the background

STÖBER has combined the motors with nine double axis regulators from the SI6 series. This highly dynamic solution works reliably in the background, even when sophisticated movements are needed. The safety functions STO (Safe Torque Off) and SS1 (Safe Stop 1), certified according to EN 13849-1 (PL e, Cat. 4), are integrated.

“The 45mm wide drive regulator is designed as a modular device,” says Wittenauer. “A single drive regulator can control up to two axes. By stringing together several regulators, the number of axes to be controlled can be freely scaled.” The installation of individual components is practically solved: The patented Quick-DC-Link modules enable standard copper rails to simply be clicked into place for energy distribution, as well as easy assembly of the drive regulator. STÖBER also supports communication via the Ethernet-based field bus system PROFINET.

As a partner, STÖBER not only supplied the most suitable components, “we also took care of the mechanical design and dimensioning,” explains Guido Wittenauer. Support from the drive specialists began as early as the quotation phase. Together, both sides discussed the critical points and worked through them step by step. “The idea that the motor with gearing and gear wheels with helical gearing create a unit for the X axis was developed together during project discussions,” says Gallenbach.

The physical proximity and the good personal contact between the two companies naturally helped in the collaboration. Parameterisation of the axes could therefore also be carried out easily on site. “The design of our entire machine concept is based on the calculations, amongst other things, of the motor technology,” comments Gallenbach. “If an error were to occur at the design stage, the entire automation could be compromised.”

System integrators and plant manufacturers rely on clearly thought out, low cost, time saving system modules which can be integrated into the design with high functionality. Thanks to the standardisation and modular design of screwdriver function modules, DEPRAG has been able to combat the enormous pressure of time and costs which modern system construction faces right from the planning phase.

“Our standards for screwdriving units are straightforward and cleverly devised. This means that significantly shorter planning and delivery times can be achieved,” explains Guttenberger. The compact and robust design, as well as the simple interfaces, enable easy integration of the screwdriving unit into any assembly system. And ROMA? The sun screening systems manufacturer now has considerably increased process reliability in production – without the need for reworking. 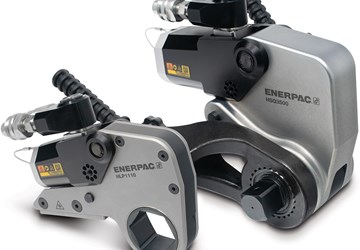