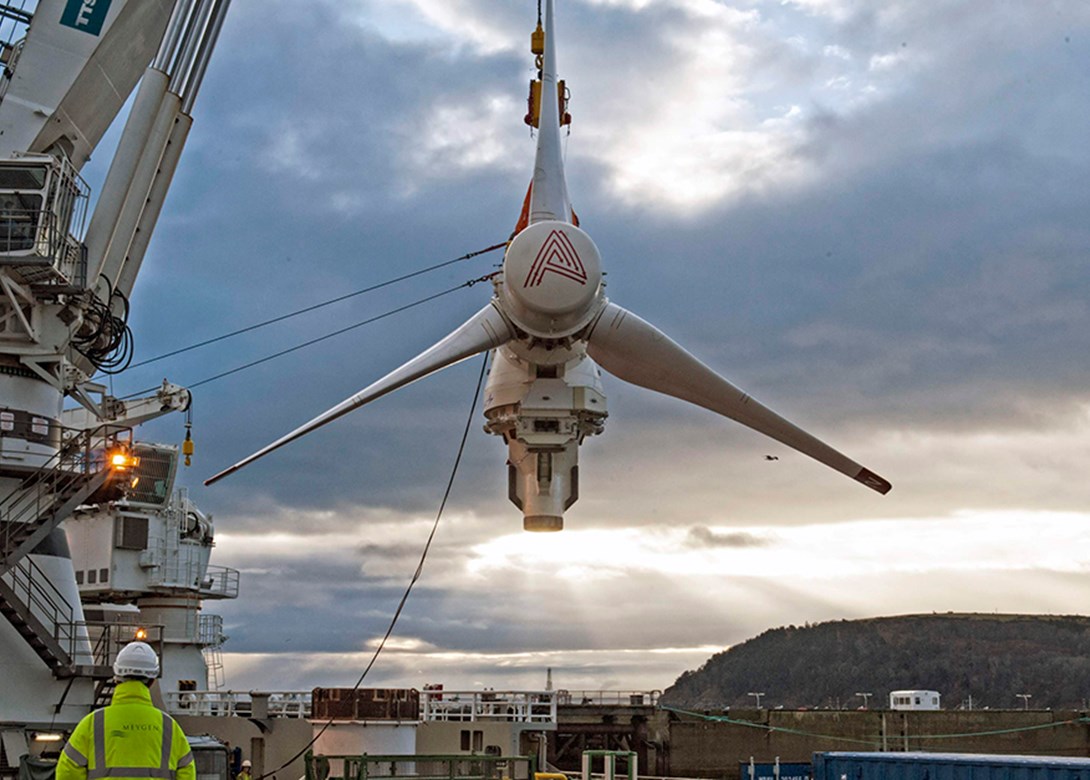 Last October, UK Prime Minister Boris Johnson said he wanted every home in Britain to be powered by offshore wind energy by 2030. The Earth’s atmosphere will become an ever-increasing source of energy, but hot (or should we say cold) on its heels will be energy from the sea, both from waves and tides.

Wind and waves are unpredictable, but tides are not; they are absolutely predictable and unstoppable as King Canute demonstrated. He was the 11th century king of Denmark, England and Norway who, according to legend, demonstrated his inability to hold back the tide to end the fawning of his courtiers.

Due to its high latitude and often cloudy weather, the UK is not so well suited to solar power, but it is very well suited to wind, wave and tidal power. The greatest tidal range is in the Bay of Fundy in Canada (up to 17 metres), but the second highest is in the Bristol Channel (up to 13 metres). The power of the sea around Britain’s coastline is phenomenal as is the design and operational task of machines to extract it.

Operating generators exposed to the natural environment is challenging because both the air and sea are destructive in chemistry and sheer power. Checking the health of machinery is important and this applies as much to the fasteners as anything else. A good example is the nuts and bolts on wind farms. They require frequent torquing and a recent development in ultrasonic checks by the UK’s EchoBolt promises to reduce the maintenance costs by GB£250 million (€276.7 million) a year across Europe’s wind farm industry.

The Offshore Renewable Energy (ORE) Catapult has supported EchoBolt in securing Innovate UK funding to expand the capabilities of its technology, as well as providing access to its 7MW Levenmouth Demonstration Turbine for further testing. EchoBolt has also taken advantage of its contacts with GE Renewables and has secured a further testing and validation project on GE’s operational turbines this year. But how do you check machinery under the sea, which may be expected to run for five years continuously, in a total lifetime of 15 to 25 years? Do you send divers or robots down or lift it for examination? These are questions being address now by the ORE Catapult and the industries that are designing and running prototypes.

Torqueing tidal blades at their root to the turbine hub has also been a challenge. Many subsea turbine nacelles are built in two or three pieces. Originally bolts were on the outside, but suffered from bad corrosion and so the fastening was redesigned to have the bolts on the inside. Then the problem was access for tightening and checking in a confined space. Lessons learnt mean that internal equipment is often mounted on a sledge that can slide out for maintenance.

The turbulence of the water can also cause severe vibration that travels into the nacelle along the driveshaft to the gearbox (if fitted) and generator. Fixings and fastenings within the nacelle therefore have to withstand the effect of long cycles of varying frequency as the turbine increases and decreases speed with the ebb and flow of the tide. The ebb and flow currents are not the same and so the designer faces a large frequency range to manage.

Subsea turbines are normally connected to a gravity base or monopile by a stab connection relying on the 200 tonnes – 300 tonnes weight of the turbine to keep it in place. Some designs use a hydraulic collar to lock the turbine to the base. The risk here is releasing the hydraulic lock after months submerged in the water, when tooling points become blocked with biofoul. Maintenance teams are still amazed that even using marine grade fastenings and fixings, corrosion remains a significant problem.

During their development, solar and wind industries benefited from government subsidies called Feed-in-Tariffs (similar to the tariff system for the power generated by the solar panels on homes) when the cost of these technologies were prohibitively high. As costs have fallen significantly through economies of volume, technology advancements, and learning by doing, the subsidies have reduced. Wave and tidal stream industries need these subsidies to help develop and reduce costs, however since 2018 no such subsidy has been accessible. The UK Department for Business, Energy and Industrial Strategy (BEIS) is currently reviewing responses to a public consultation on the subsidy mechanism, which may recognise the potential of tidal stream not only to generate renewable electricity, but also thousands of jobs during this green recovery.

The English Channel, historically the scene of conflict between Britain and France, is now the location of a powerful cooperation. The Interreg France (Channel) England Programme has approved the biggest ever Interreg project that may prove to be game-changing for the European tidal stream energy sector. The Tidal Stream Industry Energiser Project, known as TIGER, is an ambitious €45.4 million project, of which €29.9 million (66%) comes from the European Regional Development Fund.

TIGER falls within the funding category for low carbon technologies and the managing authority is Norfolk County Council. Up to 8 megawatts (MW) of new tidal stream capacity will be installed and consent for 24MW of the next tidal stream commercial arrays (farms) will be obtained at sites in and around the Channel. Coastal communities used as ports of deployment will benefit from knock-on investment and job creation. The total theoretical tidal energy capacity in the Channel region is nearly 4GW, enough to power up to three million homes.

Teo van der Kammen, technical manager for the TIGER project, points out that the cost per unit power is critical and that the tipping point will be when tidal stream power gets down to GB£150 per megawatt hour. “A lot of lessons learned in offshore wind will feed into wave and tidal power. Wave power is about 10 years behind tidal stream. Tidal stream is on the cusp of commercialisation.”

Founded in 2005 as a supplier of tidal stream turbines, SIMEC Atlantis (Atlantis) is a company that has quickly grown to include development of tidal stream projects. It now has rights to some 600MW of tidal sites in the UK alone and is the majority owner of MeyGen, the world’s largest tidal stream energy project. At MeyGen, there are plans to increase the existing 6MW array by adding at least two new Atlantis turbines. These will use a new subsea connection hub and will share a single export cable, cutting the costs of a dedicated export cable per turbine.

Known as Project Stroma, the project will receive €16.8 million from the European Commission’s NER300 programme. The company expects the yield from the enhanced array to increase by approximately 40% compared with the current configuration of four turbines.

In May 2019, Atlantis also entered a formal agreement with GE under which both parties will work together and share resources for the ongoing development of utility scale tidal energy generation and associated energy storage solutions. Atlantis and GE have been working in partnership since September 2018 on the development and performance validation of Atlantis’ AR2000 tidal generation system, which is expected to be the world’s largest and most powerful single axis turbine.

Recently, Atlantis has led the consolidation of the tidal power sector in Scotland. It is the majority owner of Tidal Power Scotland Limited (TPSL), the HoldCo that owns all phases of the MeyGen project, as well as other leading projects such as the Sound of Islay, Ness of Ducansby, Brough Ness and the Mull of Galloway. It has recently welcomed ScottishPower Renewables and DEME Concessions as co-investors in TPSL.

In France, Atlantis has agreed a joint venture with AD Normandie Développement, the regional agency for economic development in Normandy and regional investment fund Normandie Participations to develop a phased large-scale tidal power project in the Raz Blanchard. The company plans to energise the first array of tidal turbines in 2021, before rolling out larger projects from 2022.

Atlantis is actively exploring project opportunities in Japan, China and Indonesia. In India, Atlantis has identified more areas of tidal resource and has been working with Gujarat Power Corporation Ltd to complete the concept design and consenting for a 200MW project in the Gulf of Kutch.

Sean Parsons, who joined Atlantis in June and has a background in energy, comments: “It’s not a race among the technologies with an anticipated winner –  it is a combined effort. It’s not a case that one technology wins and the others lose. Wind has a lot of advantages in scaleability and has been rolled out on a large scale, but the supply chain is almost all offshore UK. State-backed manufactures are producing most of the kit.”

Sean continues: “Wind is unpredictable, which means it is hard to know the battery size requirements, because you don’t know how long it will be on and off. With tidal stream, the energy density is much greater so you a need a lot of smaller turbines. Tidal stream is approaching the sub-hundred pound per megawatt hour bracket. However, it doesn’t have the backing of large oil companies, which offshore wind does.”

So King Canute and the Old Norsemen were right in their observations of tidal power, but they could never have imagined how significant this power would be in powering man’s machines and ending harm to the Earth’s climate.

Tidal range – comparative to hydropower dams tidal range extracts energy from the vertical movement of water by holding back water as the tide level decreases and allowing the water out through turbines. This is what the infamous Swansea tidal lagoon project was about and is a mature technology.

Tidal stream (focus of TIGER) – this is comparative to wind turbines and converts power from the horizontal movement of the tides. This horizontal movement of water is accelerated in locations around islands and peninsulas, which impede flow. This technology is maturing rapidly, but faces much harsher environmental conditions under the sea – making costs comparatively high at this early stage of development. Tidal stream turbines will be much smaller than wind turbines due to the higher energy density of water compared with air (some 800 times denser). 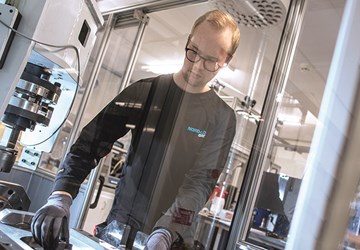