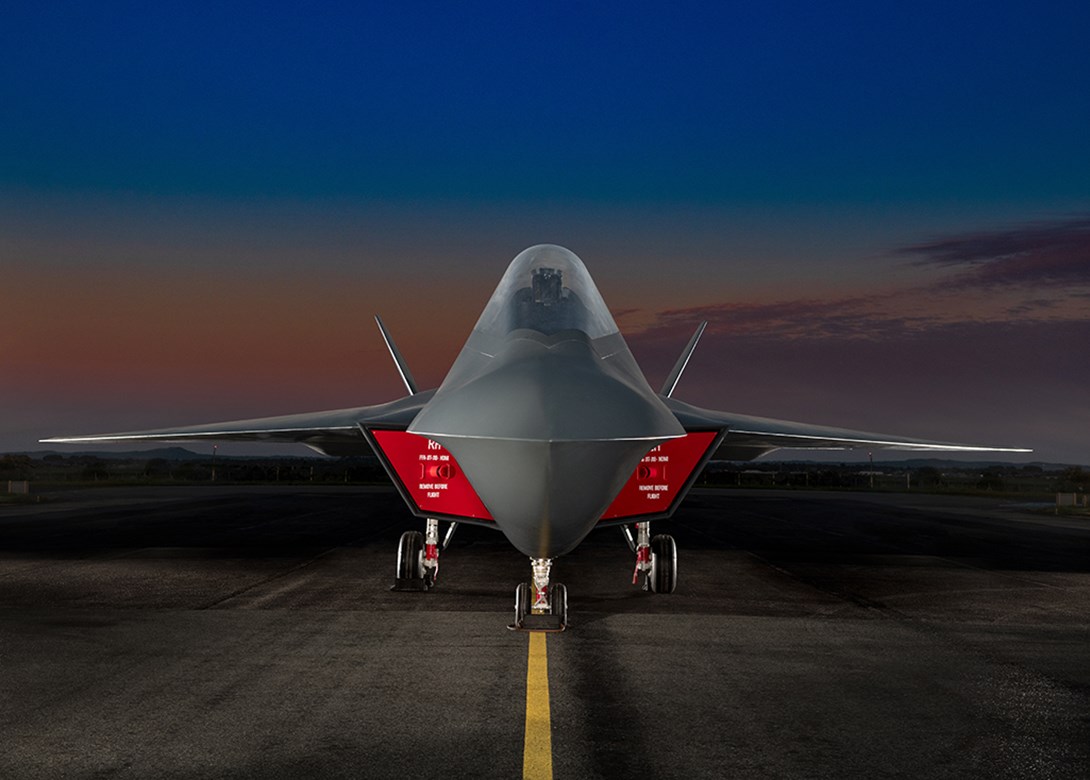 Here Freelancer Ian Parker chats with Professor Andy Schofield, director of technology programmes in the air sector of BAE Systems, about the Tempest project – a future combat air system – and how the ‘Factory of the Future’ concept will enable BAE Systems to revolutionise manufacturing.

For over 100 years, building great fighter planes has been a UK talent and may have ensured the survival of the nation. Last summer, the UK celebrated the 80th anniversary of the Battle of Britain victory, in which the Spitfire and Hurricane, and the brave pilots who flew them, probably saved the nation. An arguably better fighter, the Hawker Tempest, fought from mid-1944, but came too late in the war to make a major contribution. However, that name lives again in the UK’s latest fighter project.

The Tempest project is intended to create a future combat air system to replace the capabilities of the Typhoon, from about 2035, for the RAF and possibly other customer nations. Advanced digital technologies are being used to help design and test concepts in the project. The digital approach will also revolutionise the manufacturing process. For instance, BAE Systems is pushing ahead with the ‘Factory of the Future’ concept, which will reduce costs and speed up production.

Prof Schofield explains: “We’ve taken the challenge that Tempest gives us and we’ve translated it into a manufacturing challenge. We have to increase productivity and address the time it takes to get products to market. It’s about eliminating non-value-added activities.”

The Typhoon was BAE Systems’ first digitally designed aircraft, and also the first that was predominantly composite. There was also the F-35 jet that gave the company challenges on high accuracy and affordable composite and titanium structures. For both, BAE Systems had to perform demonstrations that proved the technologies and Tempest is no different.

“We’ve set out the need for the ‘Factory of the Future’. We have a number of technology themes, which include digital manufacturing, intelligent automation, competitive tooling and fixturing and additive manufacture,” states Professor Schofield. “If you think about our traditional ways of assembling aircraft, we have large assembly fixtures and tooling with high non-recurring costs, which we need to reduce. We have to achieve cost and lead time reductions. Our mantra is to do things 50% faster and 50% cheaper.”

In aerospace, metallic materials undergo processing, such as forming, joining, welding, hole drilling, etc, and plane makers need to develop more high-tech methods – although metallic materials, such as aluminium alloys, will continue to have a big part to play. Whilst the historical ways of forming and joining aluminium are time-consuming, and designs have moved more towards composites, by working with The Welding Institute and other partners, BAE Systems is looking at advanced methods for forming aluminium, rather than the traditional rolling, milling, stretching and fastening.

“We’re looking for novel methods of forming shapes, such as laser shock forming, and how we can join the materials without drilling holes and using fasteners. Using advanced methods such as friction stir welding is critical,” mentions Professor Schofield. “We’ve done some groundbreaking work on how we can form and join aluminium structures without fasteners, and how you can do it with a level of protective treatments that avoids the need to strip down the components, deburr the holes, put in the treatments and reassemble. That’s where much of the non-value-added activity is. In composites, we have to look at more smart structures with embedded sensors and energy storage. We also have to look at how we test and verify during production rather than leaving it until the end and finding problems then. We have to build in self-monitoring and self-correction.”

Laser forming is a non-contact forming method for sheet metals, in which the metal can be bent, shaped and precision aligned with the use of straight or curved laser scan lines to acquire desirable three dimensional features. These features would be difficult or even impossible to manufacture using conventional metal forming techniques. Laser bending is of significant value to the aerospace, automotive, ship building and microelectronics industries, which previously relied on expensive stamping dies and presses for prototype evaluations. Conventionally, the laser bending process is achieved by introducing thermal stress into the workpiece by irradiation with a focused laser beam.

Recently, non-thermal forming using a high energy pulsed laser has generated growing interest. Similar to the mechanical shot peening process, high pressure and compressive shock waves are induced onto the target material by high energy laser pulses. This non-thermal, ‘shock wave forming’ mechanism is often called laser shock forming.  Short laser pulse irradiation is used, in the range of nanoseconds, several orders less than the radiation time of the thermal forming mechanism.  The energy of each pulse is in the range of several joules, released in nanoseconds, and results in a high laser power intensity of above 1GW per square centimeter. When the high intensity, short laser pulse is focused on the surface of the sheet metal, the surface of the sheet is vaporised and ionised immediately.

High pressure plasma is then generated and expands rapidly. With further enhancement of the confined medium layer (usually water or glass) the plasma then expands and explodes violently against the surfaces of the sheet metal. The confined layer traps the expanding vapour and plasma, and consequently causes a higher pressure shock impact in the level of over 1 GPa.  When the peak pressure of the shock wave, induced by the laser at the surface of the sheet, is greater than the dynamic yield strength of the material, the sheet metal will plastically deform.

Many aerospace companies are now looking at friction stir welding (FSW) for building major structural assemblies. It was invented in 1991 by The Welding Institute. FSW is a solid state welding process that forces a spinning tool along the joint line, heating the abutting components by friction and producing a weld joint formed by strong plastic mixing (stirring). FSW promises to be a highly efficient and cost-effective alternative to the conventional fusion welding routinely used for joining structural alloys on military and civilian aircraft.

Some of the important advantages FSW offers over fusion welding include the ability to weld structural aluminium alloys (particularly alloys in the 7xxx series); better retention of baseline material properties; fewer welding defects; lower residual stresses; and improved dimensional stability of the welded structure. The material that flows around the tool undergoes extreme levels of plastic deformation and a very recrystallised grain structure forms in the centre of the weld. This region of the weld, commonly referred to as the nugget zone, is part of the weld’s heat affected zone (HAZ). The surrounding material, which constrains the nugget metal and undergoes deformation via the spinning tool’s passage, comprises the remainder of the HAZ and experiences much lower plastic strains. Because the FSW process does not melt or recast the welded material, microstructural material transformations occur during the weld’s cool down – essentially taking place in the material’s solid state.

Researchers from AFRL’s Metals, Ceramics, and Nondestructive Evaluation Division in the USA, have friction stir welded a number of aerospace aluminium alloys, including 7050-T7451, to assess the effects of the process on microstructure and mechanical properties. Optical microscopy and transmission electron microscopy (TEM) examination of the welded joint’s weld-nugget region showed that FSW transforms the initial millimetre-sized, pancake-shaped grains to fine, 1μ – 5μ dynamically recrystallised grains. The TEM examination also demonstrated that the FSW process redissolves the strengthening precipitates in the weld-nugget region. Also, in the HAZ, the FSW process preserved the initial grain size and increased both the size of the strengthening precipitates and that of the precipitate free zone by a factor of five. The AFRL team claims to be the first to explain the continuous dynamic recrystallisation process in friction stir welds.

Metal elements will continue to be indispensable in aerospace structures. Therefore joining them to composites will see increasing importance. Bolted joining of composite materials has several drawbacks, resulting mainly from drilling holes. Drilling disrupts the continuity of the fibres, reducing the load carrying capacity and causes damage (such as delamination, fibre pull-out and microbuckling). Therefore, the other methods of mechanical joining have been developed and some of them are specially dedicated for joining composite to metals.

drilling induced damage, whereas riveting and clinching disrupt the structure of the composite significantly. Other methods, including non-adhesive form-locked joints, pin joints, and loop joints, take the advantage of the fibrous nature of the composites to transfer loads onto the metal structure in a sophisticated and clever way. Methods such as self-piercing riveting or form-locked joints have been successfully developed and employed in commercial applications, whereas, the others, such as pin and loop joints, are merely ideas, tested only at the specimen level. Some methods present the possibility of joint disassembly without damage, whereas some are permanent. Other methods can be used to join any composite and others are limited only to composites with a thermoplastic matrix.

BAE Systems has technology roadmaps that will really start to push the boundaries in these areas. However, the company can’t do these things on its own and for a number of years it has collaborated widely with academia, with research technology organisations, SMEs, and with large blue chip companies. The ‘Factory of the Future’ will pull together all these technologies in collaboration with 50 plus partners from companies such as Siemens down to SMEs that have a dozen or so employees.

It also includes research centres such as the High Value Manufacturing Catapult, The Welding Institute and academia including the Universities of Nottingham, Manchester, Sheffield, Cranfield, Birmingham and Strathclyde. With 3D printing companies such as Renshaw, BAE Systems also has a strategic partnership in place and is pushing the boundaries of additive manufacture with them.

Professor Schofield comments: “Industry 4.0 is right at the heart of what we do. It’s all about how we gain advantage from the ‘Internet of Things’ and how we generate data and, more importantly, how we use it. This is a key national agenda of how we develop these technologies. The engineer of the future is being developed, as we move away from traditional aircraft engineering and manufacturing skills, to critical future skills, such as automation, digital, mixed reality and additive manufacturing. We’re developing the skilled workforce in conjunction with our supply chain. We have to take the supply chain on the journey with us.”

Building on the work BAE Systems did with Nottingham University a few years ago, the company is looking at how it can assemble an aircraft structure without fixtures, without large infrastructure around the assembly, using robotics and, more importantly, humans and robots working together. “We’re used to seeing robots working in caged areas, but we’ll be looking at the health and safety of robots and humans working in the same environment,” mentions Professor Schofield. “We’re also taking things out of the ‘Factory of the Future’, which is essentially a testbed, and putting them into our current projects. We’re sharing the development of capabilities across a wider network. A few months ago we were awarded, as consortium within the UK, government funding for the industrial development of 5G. This is paramount for the development of industrial digitisation technologies, which are critical for smart factories and digitally connected supply chains.” 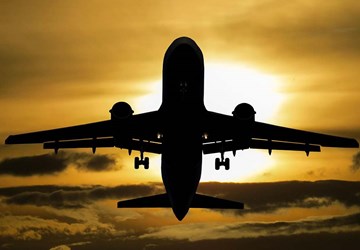 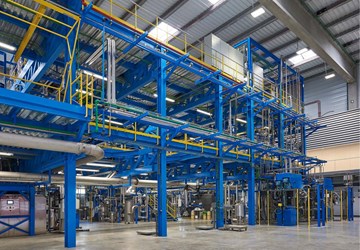